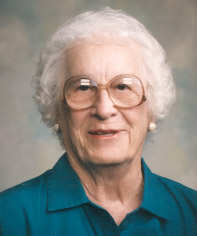 Burdonne Young’s decision to become a nurse was apparently the right choice because it is a career to which she devoted over 50 years.
Born in Woolmarket, MS, Young received her nurses training at the Old Biloxi Hospital. In 1951, she was employed by Memorial Hospital, which was then located at the CB Base. She started as a charge nurse in the surgical unit, and was promoted within three months. She served as Director of Nurses from September 1960 to December 1965. She then assumed the position of administrative supervisor until 1984. In 1972, Ms. Young was elected as Employee of the Year at MHG. She retired in September 1984 only to return 5 years later in 1990. On her “second go-around”, Ms. Young received the Donald Evans Sutter Award from the MHG Development Foundation for her service to MHG and the community. She was affectionately known as “Ms. Memorial.” In fact, her license plate read “Ms MHG.” She served on the Donald Evans Sutter Award Board, and was a member of the Memorial Auxiliary, Coast District Nurses Association, and American Nurses Association. Ms. Young was a member of Coalville United Methodist Church. On April 15, 2010, the Memorial Hospital Foundation received a check in the amount of $596,457.09 from the Estate of Ms. Emma Burdonne Young. Ms. Young’s bequest is the largest give by an individual to the Memorial Hospital Foundation. In 2011, Ms. Young was inducted into the Mississippi Nurses’ Association Hall of Fame.